All About o2 Sensors

Lambda sensors produces a voltage signal that recognises the amount of unburned oxygen in the exhaust. An oxygen sensor is essentially a battery that generates its own voltage. When hot (at least 250 degrees c.), the zirconium dioxide element in the sensor's tip produces a voltage that varies according to the amount of oxygen in the exhaust compared to the ambient oxygen level in the outside air. The greater the difference, the higher the sensor's output voltage.

Sensor output ranges from 0.2 Volts (lean) to 0.8 Volts (rich). A perfectly balanced or "stoichiometric" fuel mixture of 14.7 parts of air to 1 part of fuel gives an average reading of around 0.45 Volts.

The lambda sensor's output voltage doesn't remain constant, however. It flip-flops back and forth from rich to lean. Every time the voltage reverses itself and goes from high to low or vice versa, it's called a "cross count." A good O2 sensor on a injection system should fluctuate from rich to lean about 1 per second. If the number of cross counts is lower than this, it tells you the O2 sensor is getting sluggish and needs to be replaced.

Most lambda sensors will cycle from rich to lean in about 50 to 100 milliseconds, and from lean to rich in 75 to 150 milliseconds. This is referred to as the "transition" time. If the O2 sensor is taking significantly longer to reverse readings, this too is an indication that it is getting sluggish and may need to be replaced.

Observing the sensor's waveform on a scope is a good way to see whether or not it is slowing down with age. If the sensor becomes sluggish, it can create hesitation problems during sudden acceleration.

To reduce the warm-up time of the Lambda sensor, an internal heating element may be used. Heated O2 sensors can reach an operating temperature of as high as 500 degrees C in as little as eight seconds! Shorter warm-up time means the system can go into closed loop fuel control sooner, which reduces emissions and improves fuel economy. Heating the sensor also means it can be located further downstream from the exhaust manifold. 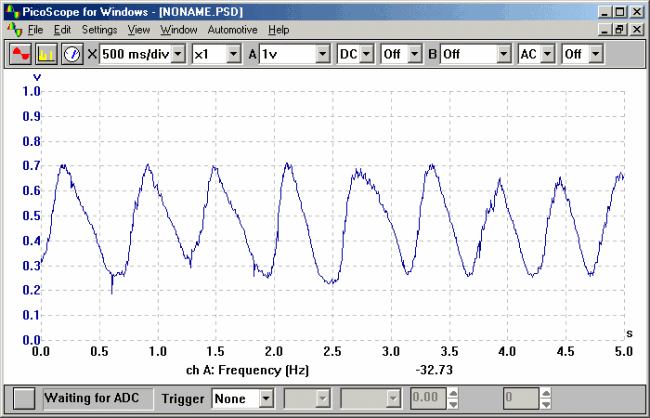 Some vehicles have a slightly different type of sensor that has a titania element rather than zirconium. Titania O2 sensors are fitted to some Vauxhalls. 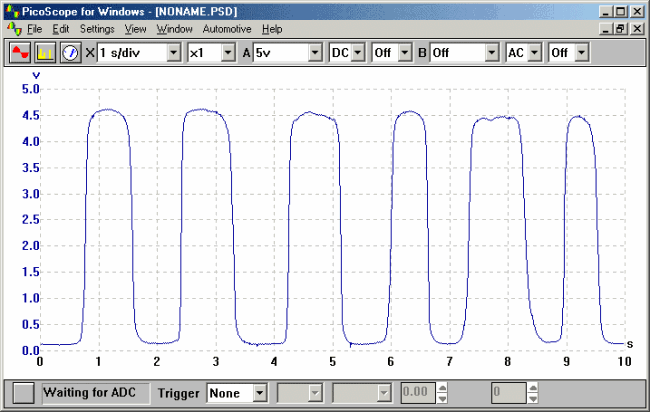 The engine computer supplies a base reference voltage of approximately one volt to the titania sensor, and then reads the voltage flowing through the sensor to monitor the air/fuel ratio. When the fuel mixture is rich, the resistance in a titania oxygen sensor is low and the sensor's voltage signal is high. When the fuel mixture is lean, resistance shoots up and the voltage signal drops.

Lambda probes have a limited lifespan since the exposed sensor element is subjected to high temperatures which causes fatigue over time. Probes become sluggish, failing to react quickly to changes in the condition of the exhaust gases. This can be caused by contamination from the engine, fuel or additives. One common fault is silicon buildup on the probe sensor. A common source of silicon contamination is through the use of silicone sealant in repairing water system leaks. Lead build-up from the use of lead additives or leaded petrol will also damage the probe, as will carbon build-up from excessive burning of engine oil. Phosphorus in the burnt oil is also a specific damaging contaminant (but the phosphorus is part of a very beneficial additive called ZDDP which as of 2005 is yet to be replaced with a less 'damaging' (to the sensor or emissions equipment) yet equally effective (in protecting the motor life) substitute. It would be expected that a probe would last for 3 years or 40,000 miles (about 64,000 km), but it has been observed that probes will last for up to 3 times this length. [Also, oxygen sensors have been used successfully for 2 years of racing with leaded gas when the sensor is put into a non-leaded gas burning vehicle to 'burn' off the lead then putting it back, etc.

As the sensor ages, it becomes sluggish. Eventually it produces an unchanging signal or no signal at all. When this happens, the Check Engine Light may come on, and the engine may experience drivability problems caused by an overly rich fuel condition. Poor fuel economy, elevated CO and HC emissions, poor idle, and/or hesitation during acceleration are typical complaints.

If the lambda sensor continually reads high (rich), it will cause the engine computer to lean out the fuel mixture in an attempt to compensate for the rich reading. This can cause lean misfire, hesitation, stumbling, poor idle and high hydrocarbon emissions (from misfiring).

If the lambda sensor continually reads low (lean), it will cause the engine computer to richen the fuel mixture. Injector pulse width will increase causing fuel consumption and carbon monoxide emissions to go up. Constant rich fuel mixture can also cause the catalytic converter to overheat and it may be damaged.

If the lambda sensor's output is sluggish and does not change (low cross counts & long transition times), the engine computer will not be able to maintain a properly balanced fuel mixture. The engine may run too rich or too lean, depending on the operating conditions. This, in turn, may cause drivability problems such as misfiring, surging, poor idle, and high emissions.

If a heated sensor has a faulty heating circuit or element, the sensor can cool off at idle causing the system to go into open loop. This usually results in a fixed, rich fuel mixture that will increase emissions.

Sometimes an apparent lambda sensor problem is not really a faulty sensor. An air leak in the intake or exhaust manifold or even a fouled spark plug, for example, will cause the lambda sensor to give a false lean indication. The sensor reacts only to the presence or absence of oxygen in the exhaust. It has no way of knowing where the extra oxygen came from. So keep that in mind when diagnosing oxygen sensor problems.

The lambda sensor is also grounded through the exhaust manifold. If rust and corrosion of the manifold gaskets and bolts is creating resistance, it may affect the sensor's output. To rule out a bad ground, use a digital volt meter to check for a voltage drop between the sensor shell and the engine block. More than 0.1v can cause a problem.

A good lambda sensor should produce a fluctuating signal that changes quickly in response to changes in the oxygen level in the exhaust. The best way to check the sensor is to observe the sensor's output on a waveform scope or oscilloscope. A scope will display not only the sensor's minimum and maximum voltage readings, and average voltage reading, but also its back and forth voltage oscillations from rich to lean.

Sensor output can also be read directly with a 10K ohm impedance digital voltmeter, or some code readers.

CAUTION! Never use an ohmmeter on a zirconium O2 sensor in an attempt to check the sensor because doing so can damage it. And never jump or ground the sensor's leads.

To check the sensor's response to changing oxygen levels in the exhaust, first create an artificially lean condition by pulling a large vacuum line. When extra air is introduced into the engine, the sensor's voltage output should drop to 0.2 V.

To check the sensor's rich response artificially richen the mixture by, if possible, clamping the return fuel line momentarily. This will force more fuel through the injectors and should cause the O2 sensor's voltage to increase to 0.8 V.

If the sensor's output fails to respond to the changes you've created in the oxygen level in the exhaust, it's time for a new sensor.

Zirconium sensors can also be bench tested by heating the tip with a propane torch while monitoring the sensor's voltage output with a digital voltmeter. Connect the positive voltmeter lead to the signal wire (normally black) coming out of the O2 sensor and the negative voltmeter lead to the sensor's outer shell. Then heat the tip of the sensor with the propane torch. The tip should be hot enough to turn cherry red, and the flame must enter the opening into the sensor tip. If you get a voltmeter reading above 600 millivolts (0.6 Volts), and the reading quickly changes as you move the flame back and forth over the tip, the sensor is okay. A low reading or one that is slow to change means the sensor needs to be replaced.

Removing the sensor when the engine is cold will lessen the odds of stripping the threads in the exhaust manifold. Penetrating oil may be needed to loosen rusted threads. Once the sensor has been removed, the threads in the manifold should be cleaned before the new sensor is installed. Apply graphite grease to the sensor threads unless the threads are precoated.

Everybody knows that spark plugs have to be replaced periodically to maintain peak engine performance, but many people don't realise the same goes for oxygen sensors. As long the lambda sensor is working properly, there's no reason to replace it. But after 30,000 to 50,000 miles of being constantly bathed in hot exhaust gas, a build up of deposits on the sensor tip can make it sluggish. If there's enough clinker on the sensor tip, the sensor may produce little or no voltage at all. This produces a false "lean" signal that makes the computer think the engine needs more fuel, which it doesn't but gets anyway. This creates a rich fuel condition that kills fuel economy and sends carbon monoxide and hydrocarbon emissions soaring. The engine may also experience additional drivability problems such as surging or hesitation.

The same kind of thing can happen if the lambda sensor is contaminated by deposits from sources other than normal combustion. It only takes a couple of tankfull's of leaded petrol to ruin an lambda sensor (and catalytic converter). A lead contaminated oxygen sensor will typically have light rust coloured deposits on the tip. Another source of sensor contamination can come from silicone poisoning. If somebody used the wrong kind of silicon sealer to seal up a leaky rocker box cover or manifold gasket, silicone can find its way into the engine and foul the sensor. Silicates, which are used as corrosion inhibitors in antifreeze, can also cause the same kind of poisoning. Sources here might include a leaky head gasket or racks in the combustion chamber. Silicone deposits on the sensor tip will have a shiny white to grainy light gray appearance.

If the engine has an oil consumption problem due to worn valve stem seals, piston rings and/or cylinders, a build up of heavy black to dark brown oily deposits on the sensor tip can make it sluggish. If the deposits have a black powdery consistency, the fuel mixture is running rich. This may be due to the sensor already having failed, or it might be due to something else such as a leaky injector or a computer problem, or constant short journeys where the cold start system doesn't have time to come off (open loop) known as housewives car.

When ever you suspect a lambda sensor problem, the first thing you should do is scan for any codes that would implicate the sensor circuit. A code by itself doesn't necessarily mean the sensor is bad, however. It might be a wiring problem or something else. So always follow through with the diagnostic check to diagnose what's wrong before you replace anything.

If you don't find any codes, that doesn't necessarily mean the lambda sensor is okay. In many instances, a sluggish sensor may not be bad enough to record a fault code but will still be causing an emissions or drivability problem.

This application note was kindly donated by Mobile Tuning Sunderland

Back to Index of Links

The WORLDS best source of technical information for the

found anywhere in the world!

LS1 / LT1 clutch bleeding, WITHOUT getting under the car

Technical Aides - "Now sorted by category"  This is what you've been waiting for.